IMPROVE HIGH ARM SWINGS, PRECISE APPROACHES, AND MAXIMUM JUMPS EVERY TIME, ALL WITHOUT THE NEED FOR A SETTER. 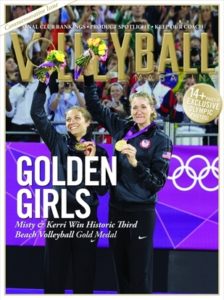 ​
In the summer of 2010, Florida State’s head women’s volleyball coach Chris Poole was about to begin his third season with the program but was still building, trying to make his sometimes inexperienced players into a nationally-competitive team. out of the blue, he received a phone call from Dustin Sahlmann, a former manager at Arkansas where Poole coached between 1994 and 2007. “Hey Coach Poole,” Sahlmann said, “We haven’t talked in years, but I’ve got a good friend who’s developing this machine to work on hitters’ arm swings. Would you be interested in trying it out?”

The machine Sahlmann—now a head coach himself at Philander Smith College in Little Rock, Ark.,—was peddling is the AcuSpike, an adjustable mechanical arm and bucket that holds a ball above the net for hitters to approach to and hit the ball out of. the AcuSpike is made to promote high arm swings, precise approaches, and maximum jumps every time, all with- out the need for a tosser or setter. poole gladly agreed to begin using it with his 2010 team, to the delight of Assistant Coach holly Watts, whose first thought was how nice it was that she wasn’t going to have to toss for hitters all the time anymore. 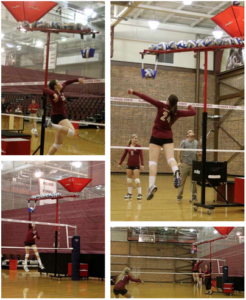 Today, as they are in their third season of working with the AcuSpike, Poole and Watts are intimately familiar with the apparatus and have found there is little not to like.

“The only time we’ve had any trouble is when we tried letting them do some serving out of it,” said Watts. “That’s something we kind of played with at the beginning. the toss is so important to the serve you’ve got to incorporate it in the training part, so it didn’t make as much sense to use [the AcuSpike].”

Overall, the AcuSpike seems to have helped the Seminoles improve. in fact, last season they stormed all the way to the final four in San Antonio, a first in the program’s history.
​
Watts credits this not only to the AcuSpike itself, but the way she and poole have chosen to incorporate it into their daily routines. for the first 45 minutes of every practice, Watts takes the middles and right sides to a court with the AcuSpike, and they work on approaches, arm swings, blocking, and transitions, while the setters, outsides, and serve receivers can all be spending that time perfecting their own skills, without being required to set or pass for their teammates.