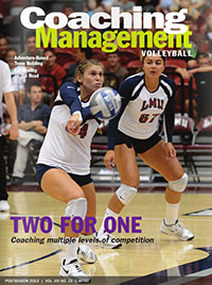 based practices. But for many athletes, working on a skill such as spiking can be difficult and time-consuming when done in pairs. One solution to this problem is the AcuSpike, which is a self-reloading, multi-ball machine allows players to develop this skill on their own, quickly and easily.
​
After the AcuSpike is set up, balls roll down a ball rail into a foam gripper, which can be set at a height from six to 11 feet. Once a player strikes the ball, the next one automatically dropped into the gripper. This allows players working alone to execute multiple repetitions quickly. “I think it’s a great product,” says University of North Carolina Head Coach Joe Sagula. “Now, players don’t need to rely on a setter to work with them, and they don’t have to go chasing after balls.

The Tar Heels started using the AcuSpike last summer, mostly with their youth camp players, and Sagula says it provides numerous benefits to young players. “It’s great for their timing because it eliminates all the other variables and distractions that occur when you’re doing a drill in practice,” he says. “The players are able to concentrate on their approach, arm swing, and wrist snap.”

The ability to lock balls in at specific heights and adjust those heights are also beneficial. “When you’re working at a consistent height, it positively impacts jump training by providing instant feedback,” Sagula says. “Players will always know, ‘this is the height I need to strive for,’ and if they’re not jumping high enough, they won’t reach the ball. And if a player is constantly reaching a certain height, it’s easy to move it up another half -inch. Not only does that reinforce that they’re improving, it gives them a goal to reach, which is something we stress.”

Sagula also says that the ball-catcher basket can provide help to setters and passers. “It gives them something to visualize so they know where they need to be delivering the ball to, and they won’t need to shag them after they’re done.”

Currently, the Tar Heels make the AcuSpike available to players to use during the summer on their own, and Sagula believes it will have an impact on the team in the future. “Once you get one or two players using it and they see how easy it is, everyone’s going to get on board. I think once our players adjust to doing it on their own as opposed to working with a teammate, they’ll use it even more.”